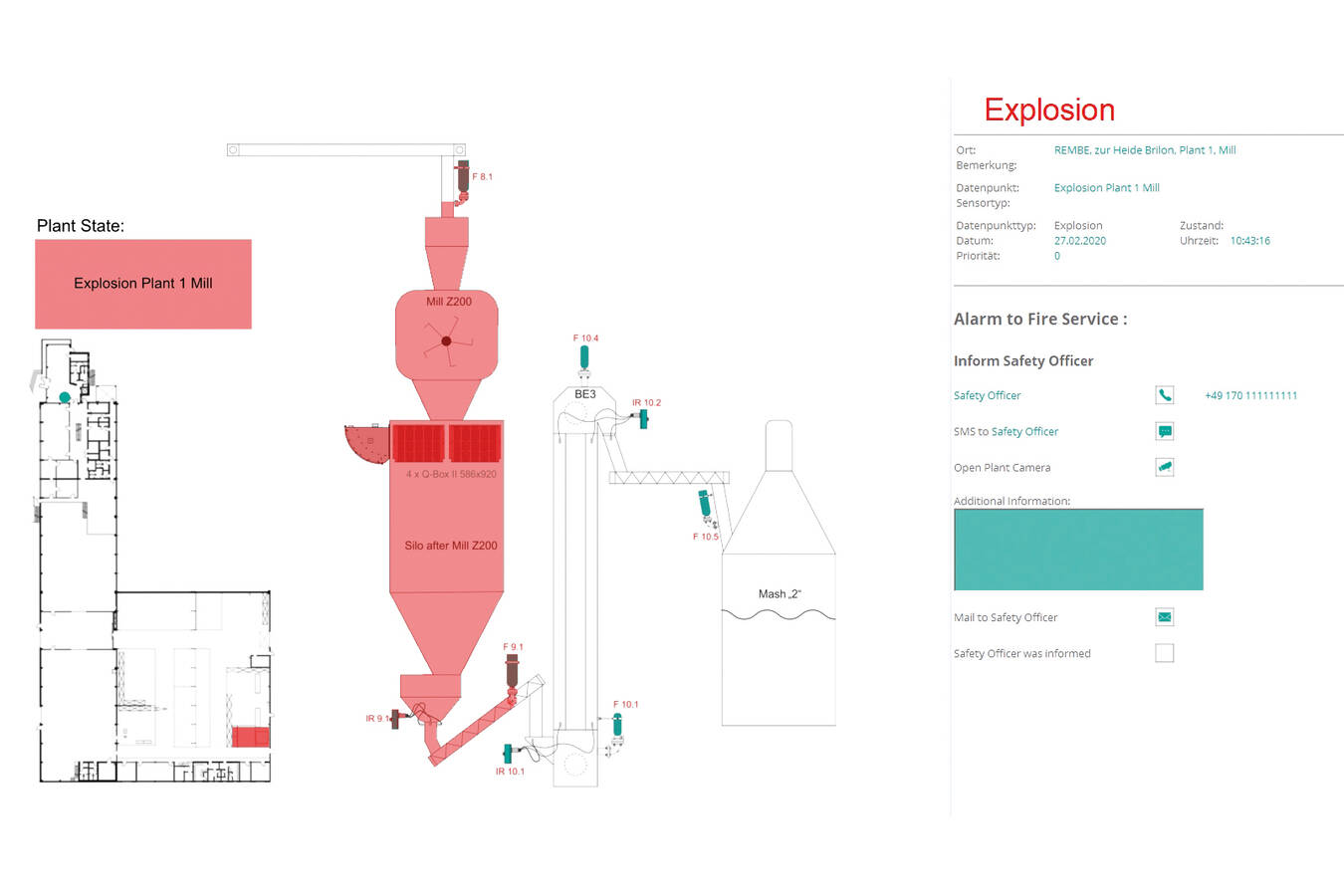 Digitisation in the field of explosion safety

Visualisation of safety-relevant faults in the control room are only half the battle. In order to appropriately react to such faults, pre-defined counter measures have to be initiated – what sounds simple is a true challenge for plant operators in practice. Although protective systems and plant components react autonomously, the right behavior of employees in critical situations is mandatory. Given the risk of human error, the REMBE iQ Safety Cockpit was developed and launched:

Similar to a process control system, the REMBE iQ Safety Cockpit offers an overview of all relevant protective and equipment system status, which can also be monitored in real time from any location remotely via smart phone. However, in addition to the PLC, detailed and automatic and semi-automatic action plans can be linked and initiated: In case of an event in a certain area, sending an email or an SMS to a pre-defined distribution group can be automated to bring the incident to their attention. Such a scenario could for example be, that in the event of an explosion the responsible safety officer might be informed by text message via his service phone, the surveillance cameras in the affected area could be activated or set to a different mode and the management would receive an email. Nevertheless, more importantly, the REMBE iQ Safety Cockpit guides the logged in user through the pre-defined plan of action.
Forced guidance thereby would ensure that all desired and necessary process steps are followed in the event of a disruption. Those applications and process scenarios of the REMBE iQ Safety Cockpit can be individually configured for each plant; both analog and digital signals can be processed. In addition to the REMBE autonomous protective systems, GreCon spark extinguishing systems, camera systems or even fire detectors and other plant components can be combined and connected to the REMBE iQ Safety Cockpit.

Learnings from incidents and systematic root cause analysis are subject to be implemented in improved safety concepts. REMBE iQ Safety Cockpit supports as all data recorded during the emergency plan are compiled and archived in a comprehensive log. This data can be practically expended or adjusted via the various end devices. When the location of the accident is inspected, photos can be conveniently taken and loaded into the log (via app) for subsequent evaluation.

In the end, this means, that all conventional autonomous protective systems from REMBE have become smarter without sacrificing their actual strength, the fast and reliable function.

In the age of digitization, it is just as important to ensure a fast response time and the resulting high availability. The REMBE iQ Safety Cockpit also enables optimal integration of other interfaces through the individually coordinated visualization of each process. Faults or, in the worst case, explosions not only require a regulated emergency plan, but also a predictive maintenance that is not only possible through the pure workforce of the employee on site. By detecting the operationally relevant components such as explosion vents, quench valves for explosion protection or pyrolysis gas and fire detectors or grounding systems for explosion prevention, all these can be registered and connected to a material management system.

With the GSME and HotSpot detectors from REMBE, an artificial intelligence has been created that detects fire and explosion events at an early stage. The GSME detector is an artificial nose, "trained" for pyrolysis - popularly known as smoldering gases, while the HotSpot detector represents an artificial eye that already detects surface temperature changes of 1 ° C.
Connected to the REMBE iQ Safety Cockpit, the two explosion prevention systems can evaluate changes in state and bring the system into a safe state either automatically or via precise instructions to the operator.
If an event, such as an explosion occurs, the system recognizes which areas are affected and provides information about which spare parts are required in order to restore the system to a safe state as quickly as possible. These functions can be submitted in the operator’s system as a "suggestion" or sent directly to the manufacturer as a non-binding request. This creates the option to reduce, the time of plant downtime.
In a nutshell: REMBE iQ Safety Cockpit is nothing else than a smart home control or driver assistance system in the automotive industry. Those are used to improve the efficiency and safety of driving a car and enable, in the right mix of auxiliary sensors and smart detectors, autonomous driving. Staying in that picture, simply spoken, REMBE iQ Safety Cockpit, such as an driver assistance system for plants will allow autonomous operation and push safety and efficiency to the highest possible level in the industry 4.0.

REMBE® GmbH Safety + Control
REMBE® is a safety specialist in pressure relief and explosion safety. It provides customers in all industries with safety systems for their plants and equipment. All products are made in Germany and meet the requirements of national and international regulations. REMBE® customers include market leaders in numerous sectors, such as the oil and gas, food, wood, chemical, pharmaceutical and petrochemical industries. REMBE® takes a comprehensive approach, primarily developing and making its own products while also providing the relevant consultancy, engineering and service. The independent family enterprise, founded in 1973, employs a global workforce of around 250. REMBE® has its headquarters in Brilon, in the hills of the Sauerland region (Germany), and runs eight subsidiaries to support its worldwide customers right where they are. Thanks to its short lines of communication, the company can respond quickly and find customised solutions for all applications, ranging from standard products to special high-tech designs. Its most important proprietary products and processes include the KUB® reverse acting buckling pin bursting disc and flameless venting technology- REMBE® has active worldwide engagements on various professional bodies and is also involved in planning and setting up international standards and regulations.
Last update: 13.10.2020
PLATFORMS
Solids-Portal.com Schuettgut-Portal Solids-Portal.nl Recycling-Portal
SIGN UP FOR OUR NEWSLETTER
Newsletter archive
Service and contact
ContactDisclaimerPrivacyAdvertising